Strashnoto Ezero (The Dreadful Lake) Shelter is a massive stone building with a narrow entrance equipped with plank beds, a table, a few chairs and a stove. If needed, the beds can accommodate about 15 people but the sleeping room is too narrow for so many people. Not more than 6-7 people can sit comfortably around the table.

The shelter is well-insulated and when the stove burns it quickly becomes warm. There is no place nearby where you could collect wood so if there is a pile of wood in the entrance, please use it sparingly. Strashnoto Ezero is located on the territory of Rila National Park so breaking and chopping mountain pine bushes isn’t allowed which makes finding fuel even more difficult.
You could take water from the spot where the Scary Lake flows out. There is something like a fountain 15-20 metres under the shelter, near the path towards Kobilino branishte.

There is no toilet near Strashnoto Ezero Shelter. When you go to the toilet, it will be best if you get as far as possible from the lake (whose water you’re going to use for drinking), the paths and the building. For example, you could go northwest, along the path that goes up the hill behind the shelter. 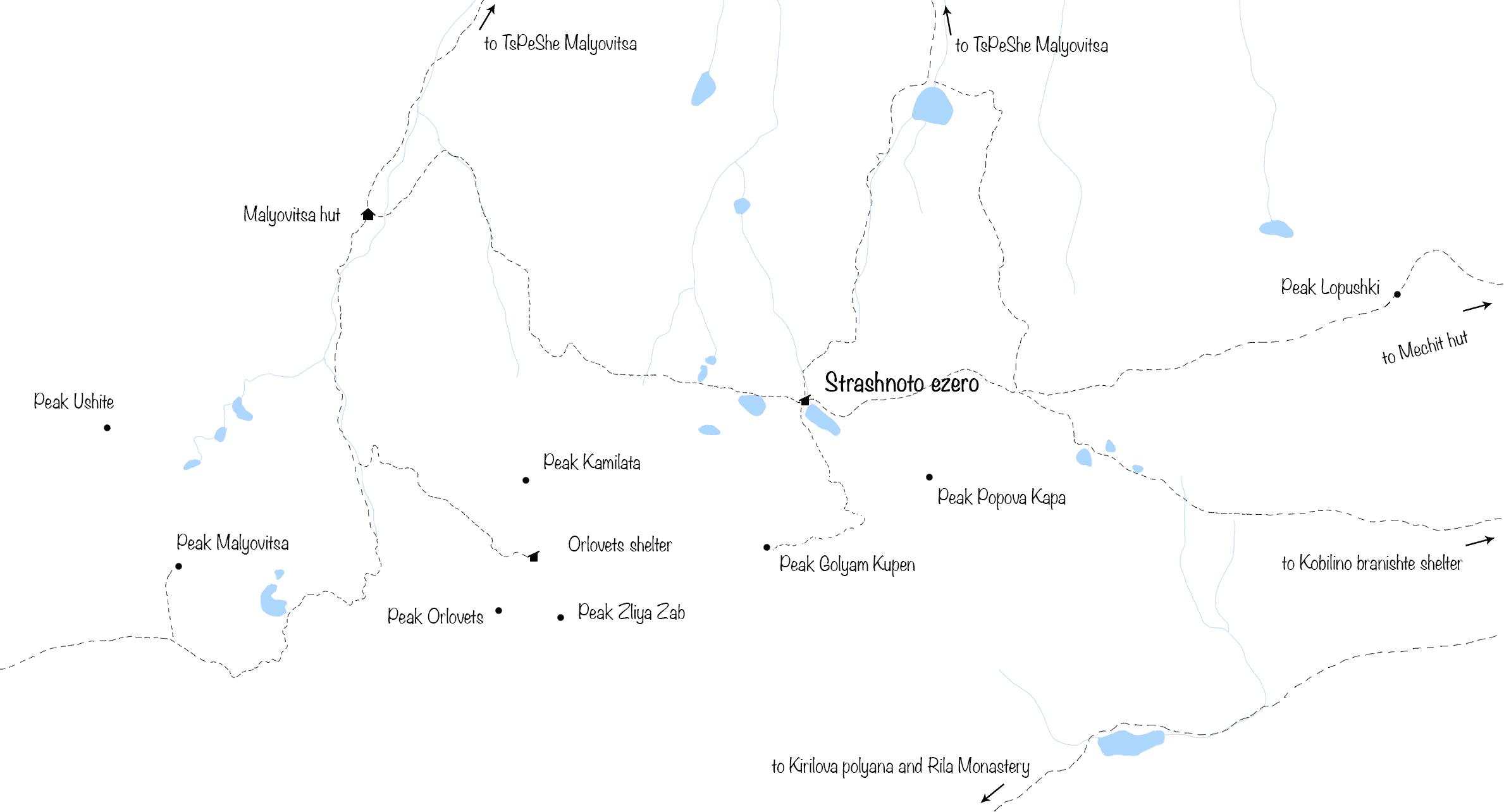 Strashnoto Ezero Shelter is located in the Malyovitsa part of Northwestern Rila, at the foot of the highest peak in this part of the mountain – Golyam Kupen (2731m of altitude). It is built on the shore of Strashnoto ezero (The Scary Lake) at 2465m of altitude. The most convenient starting point for a hike to the shelter is Tse-Pe-She “Malyovitsa” (Malyovitsa Central Mountaineering School) with two possible routes in the summer – along Yonchevo ezero or by Malyovitsa chalet, which is the winter trail.

The path via Yonchevo Ezero is white-green-white-marked and starts at the entrance of the hotel (located above the school building and the Samokov shuttle stop). It takes about 2 hours to reach the lake. To go on towards the shelter (an additional hour or so), at Yonchevo you need to abandon the green marking and, going along the west side of the lake, continue on the blue marking. What follows is a long but comparatively slanting ascent. A bit before you reach the shelter there is a difficult steep area where you have to walk across rocks which, however, is quite short and then it takes about 5-10min of walking on even ground to get to Strashnoto ezero. The total distance is about 5km, with an elevation gain of approximately 800m. It should take you about 3 hours and 30 minutes.

The trail that goes by Malyovitsa chalet starts from Mechata polyana in front of the Tse-Pe-She “Malyovitsa” building and follows the path along the river up to the chalet (it’s blue-marked, but considering how wide the path to the shelter is, you can’t get it wrong). After the chalet, follow the red marking: the path descends towards the river, crosses it and then goes over the Razhdavitsa ridge, first diagonally and then steeply. Next are short descents and ascents at the feet of the peaks of Kamilata (The Camel), Lovnitsa and Golyam Kupen and a final, a bit longer, ascent towards the terrace where Strashnoto ezero and the eponymous shelter are located. The whole distance is about 6 kilometres with an elevation gain of 800 m.