To get to Pashovi skali you first have to go to the area of Yundola. It is located between the most eastern slopes of the Rila mountain and the first ridges of the Rhodopes at around 120 km to the southeast of Sofia. The place is accessible by car via the roads Belovo-Razlog and Velingrad-Yundola but if you are adventurous and you want to see more of the country then you can take the train and get off at Sveta Petka station. Check the scheme bellow to get an idea which way to go from there. 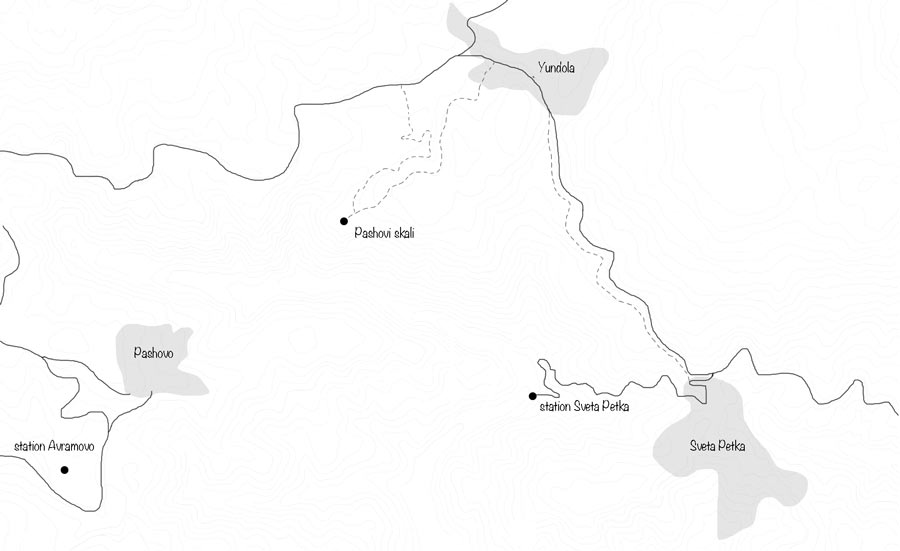 Once you get to Yundola you will see an intersection and a small market square next to it. From here you have to options. One is to follow the road towards Velingrad until the first right turn (about 200 metres or so, be careful not to confuse it with the second turn which is just a couple of metres further down and goes to the hut 'Yundola'). Leave the asphalt road here and follow the dirt path which crosses the meadow. It will soon end in front of a gate. A smaller trail starts there (go to the right and look around for the white-red-white marks or just follow the fence and you will soon see it). In 15 minutes this trail will take you to Pashovi skali.

The other way is to continue along the asphalt road in direction to Razlog for about 500 metres and after the forest nursery to turn left. A dirt road will take you from there to Pashovi skali.