Vihren peak is the highest in the Pirin Mountains, the second highest in Bulgaria and the Balkans' third, after Musala and Mount Olympus.

The peak is situated in the area of the mountain located north of the town of Bansko. Most of the tourists start their ascend from Vihren hut - a mountain hut built at altitude of 1950 metres in the valley of the Banderitsa river, several kilometres away from the town. To get there you can either walk (about 4 hours along a marked path) or take one of the minibuses that start from the town’s train station and go to the hut several times a day during the summer season. Whichever option you choose, once you get to the hut, take the marked trail (white-red-white) that starts from the cark park and climbs up the eastern slope of peak Vihren. The ascend from this side of the mountain is not technically difficult thought the cumulative gain is more than one thousand metres and the last section of the trail crosses many loose rocks while climbing the steep marble slope before the top. If one keep a good steady pace, taking the distance from the hut to the highest point of the mountain usually takes 3-4 hours or so. 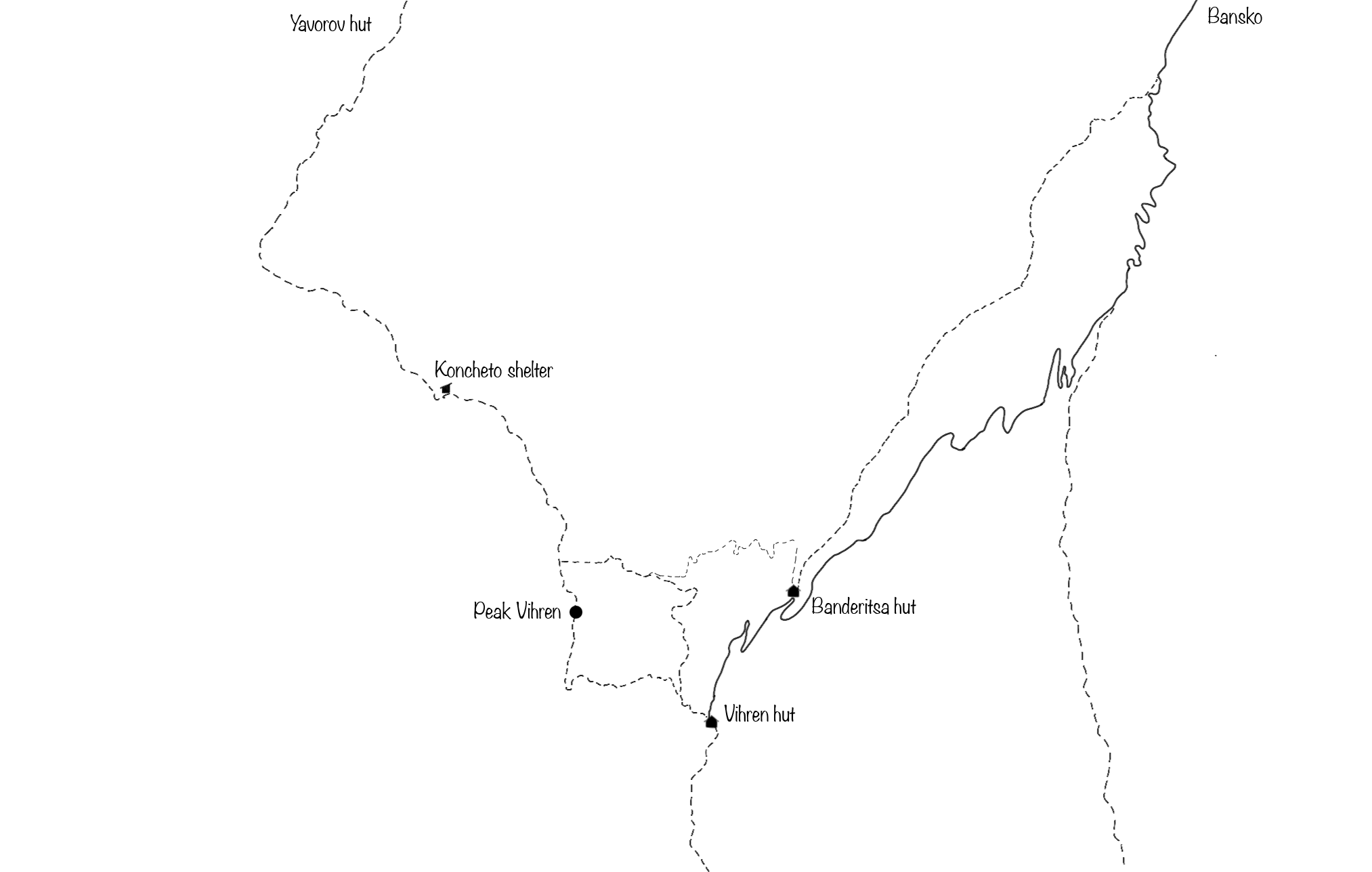 In a good clear day the view from peak Vihren is nothing short of impressive. If you look to the north, you will see the distant ridges of the Rila Mountains. Before them, rising steeply from the saddle of Premkata, is the southern slope of peak Kutelo. Next to it is Koncheto (the Marble Ridge) - a narrow ridge with very steep slopes that attracts the interest of those tourists that enjoy the adrenalin rush. West of peak Vihren is the valley of Vlahina river. It springs from a group of glacial lakes whose blue waters reflects the sun beams south-west of the top. The granite body of peak Hvoynati is to the south, just next to the path that comes from hut Vihren. Behind it you will see peak Muratov. Going counterclockwise from there your gaze will stop on the peaks of Banderishki chukar, Momin dvor, Samodivski, Todorin vrah and Strazhite further in the distance. Closer are the ski runs of Basnko ski area which have cut the body of the mountain, leaving many ugly scars. Though construction inside the Pirin National Park is fobidden by the law, the socio-political situation in Bulgaria has allow an off-shore company to cut down vast area of the park and to build lifts, ski runs and even an artificial lake. The town of Bansko, which was a small picturesque village before the expansion of the ski area, have consequantly become a vast construction site where hundreds of new hotels were erected in the middle of the field next to the former borders of the town. You can see them if you look down from the top towards the valley. Unfortunately further expansion of the ski area and the town is currently being promoted both by the local and the national authorities. If that happen, the condition of the national park, which is also an UNESCO site, will additionally be worsened. And of course the owner of the off-shore company that operates the ski centre is unknown...

If you want to avoid going down the same way, from the top continue north. The descend is steep but when there is no ice or snow, it is something any physically fit person can probably do. You will find a metal chain to support yourself at the most difficult places. Anywy - use it with a thought of caution. Each winter these chains are exposed to the force of the elements and one can't be sure how strong are the anchor points to which they are attached to. Once you reach the saddle between peak Vihren and peak Kutelo (Premkata), turn right and continue going down. Following the white-red-white signs you will get back to Vihren hut.

Those of you who want to visit Koncheto (the Marble Ridge) - from Premkata don't go down but follow the trail that is going up. Early in the summer, when there are still patches of snow on the southern slope of Kutelo, head stright up towards the highest point of the ridge. If the snow is completely melted, then goes diagonally across the slope.

Climbing Mt. Vihren in the winter is both risky and technically demanding. There is no safe way up - whenever there is snow, there will be some avalanche risk no matter which way you choose. Unless you are an experienced mountaineer, in which case all my advices are probably not needed, proceed with caution. Study the possible ways up, check the snow conditions before start climbing and of course take the necessary equipment - crampons, ice hammer and etc.. You may also here a professional mountain guide but be careful who you choose to go up with. Early this year an accident with a group of one guide and two clients has caused the death of one of the clients.

Note: the duration of all tours is approximate and refers to the summer season.